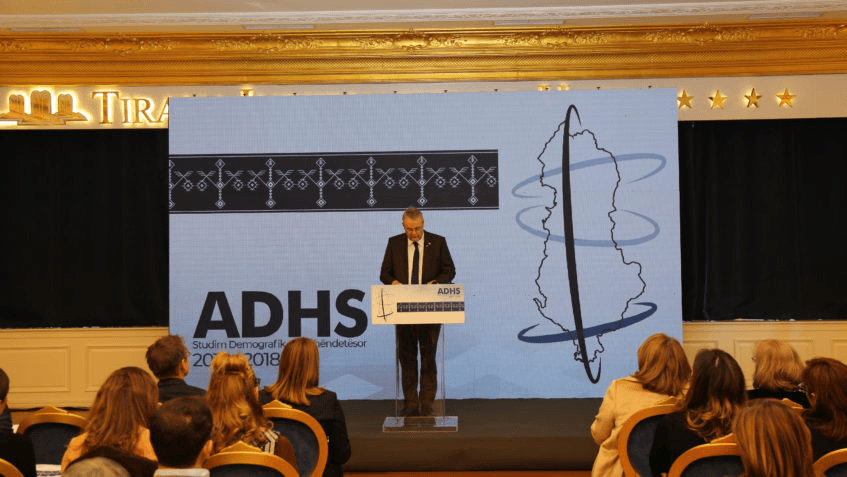 The Albanian Demographic and Health Survey (ADHS) is a household nationally-representative survey that included interviews in 15,823 families from all 12 Qarks (regions) of Albania. The fieldwork for data collection was carried out between September 2017 and February 2018. The survey provides an updated evidence on the living conditions of respondents, demographic characteristics of the population involved in the survey, lifestyle health risk factors and non-communicable diseases, maternal health care and family planning, child health and nutrition, HIV and AIDS.

The Survey was primarily financed by the Embassy of Switzerland in Albania and co-funded by the Government of Albania and UN institutions (UNFPA, UN Women, and UNICEF). The Swiss contribution was provided through the SDC-funded project, Health for All (HAP), for an amount of 800,000 CHF.

The final report of the Survey was launched in Tirana on December 12, 2018.  During his speech, the Swiss Ambassador Adrian Maître emphasized the importance ADHS has for providing data on family health, population, fertility, family planning, nutrition, mortality, behavioral risk factors. Additionally, Ambassador Maître mentioned that health information should be in formats that meet the needs of multiple users: policy-makers, planners, managers, health care providers, communities, individuals.

The ADHS 2017-2018 includes an orientation towards non-communicable diseases (NCDs). NCDs are one of the main causes of death and disability in Albania, a similar situation as in other parts of South Eastern European Region. Health for All Project’s objectives are closely related to raise awareness of non-communicable diseases, their prevention and treatment. On this regard, ADHS findings on NCDs prevalence serve as a benchmark into comparing the actual health situation of Albanians with that of 10 years before, observe existing trends and the data generated helps toward needs tailor interventions for a better health of Albanian population.

There is evidence on improvement of hypertension treatment and control in the last 10 years in Albania. Thus, ADHS 2017-18 shows that 25% of women and 20% of men that are diagnosed with hypertension are treating it and their blood pressure is under control. These figures were respectively 3% for women and 1% for men in 2008.

Obesity has increased among women in Albania. According to ADHS 2018, the percentage of men overweight or obese is 53% in 2018 or exactly the same as in 2008, while the percentage of women overweight or obese has increased from 39% in 2008 to 45% in 2018. Therefore, it is an immediate challenge to reduce the risk factors related mostly to nutrition, diet and physical activity, with a specific attention on girls and women.

As per the above, the ADHS results help provide the necessary information and analyses to assess, measure, and evaluate the existing programs in the country. It also provides crucial information to policymakers when drafting new policies and strategies related to the health sector and health services in Albania